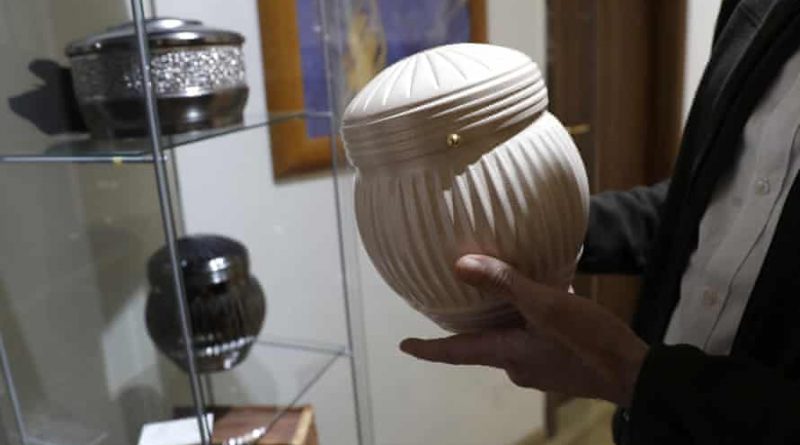 In ancient civilizations, ashes were left for the dead to scatter in different directions.

Some of the ashes were in urns which they buried, and the rest were scattered in the ground. These urns were often made of clay and would be placed inside the tomb where the dead person was interred.

In China, India, Egypt and Greece, cremation urns were very similar to the cinerary urns, the only difference is that these ancient cultures did not use a stone lid, and had many small holes, to allow the ashes to disperse.

In the early days, only people of high social status could afford to cremate their dead in an urn, and it was the poorest class of society who usually buried their dead or spread their ashes in a pit.

The concept of cremation of corpses was common in ancient Rome.

The images below are reconstructed from various architectural drawings and paintings, showing the form and function of these urns.

The sculptures are attributed to artists and sculptors. Funerary urn and cremated corpse with head to the left and abdomen to the right.

Cremation urns from c. 1300 In the days before cremation became common, people buried their dead in urns.

Cremation urns for the rich and wealthy A conventional chambered urn is an ancient urn shaped like an Egyptian pyramid.

Cremation urns used by prominent figures The rock star John Lennon and his wife were cremated together as a couple, according to their request.

The rock singer Kurt Cobain died alone, and was cremated with no ashes. Cremation urns A simple single urn was originally a standard offering from the pagan Greeks and Romans.

Since Roman times, more elaborate urns have been made. Early Christian usage The Christian Church promoted cremation as a way of expressing a belief in salvation by Christ. This belief remained popular into the mid-nineteenth century.

The development of modern cremation urns

The term coffin or urn is applied to a flat, metal container for holding the ashes of the deceased.

Ancient Egyptians are credited with producing the first well-developed form of container in the fourth century BC, however the real origins of the containers began centuries earlier.

In some countries, like Spain, Portugal and Italy, the origins of the modern funeral urn are found in very ancient burial practices.

Before the discovery of the New World, burial practices were performed in the Old World, in particular in areas like Spain, Southern France and Eastern Europe.

It is known that in those countries, where the first burial mounds have been found, the remains of the deceased were wrapped in woven linen in woven caskets.

is most closely linked to the development of ancient Roman religion and funerary practices. They were made of wood or metal, and usually placed inside a niche on a tomb wall or between two stones.

The ritual of entombing remains in wooden urns started in ancient Greece, and spread throughout Europe in the 3rd century BC.

In ancient Egypt, the most common type of cinerary urn was made of alabaster (a limestone-like rock made of pure volcanic material), with a white or yellow and greenish-brown color.

It is the earliest type of cinerary urn and is used until modern times. Stone urns were used in ancient Assyria, Ugarit, Babylon, and Egypt.

In ancient Rome, the only common form of funerary urn was the zinc cinerary urn which was made of clay, often incorporating wood for handles and decorations.

Zinc-lead or zinc-brass were also made, but they did not come into common use. Typically, a bronze brass was used for brass; alabaster was used for wood.